Original article published in The Southeast Outlook on April 22, 2021 and written by Tony Nochim. 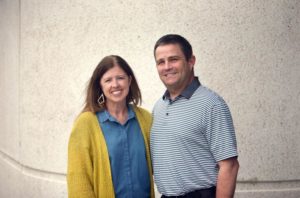 A couple of days before Darin and Allison Young’s High School Ministry small group meets at their home, their teenage sons, Max and Carson, usually receive text messages from group members about dinner.

“They’ll text, ‘What’s on the menu? What’s for dinner?’” Darin said. “It’s funny they’re thinking about that a couple of nights prior. Our girls eat twice as much as the boys. It’s hysterical. I love seeing that they just come. There’s no holding back. Everybody is completely themselves. We’ve been encouraged by parents telling us, ‘Our kids can’t wait to get there on Wednesday night.’ That’s huge for us.”

The Youngs, who are members of Southeast’s Shelby County Campus, have hosted a group for two years. About 15 to 20 high school freshmen and sophomores attend the weekly group. After dinner, the boys and girls separate into groups to study Scripture.

“This has been a hard year,” Allison added. “For some of them, getting to come on Wednesday nights is their normal. Getting to be with their friends and talk to them, it feels normal. I have seen how helpful it’s been and how open they’ve been about their struggles. For somebody else to say, ‘That’s been the same with me. I’ve been there too.’ I’m glad to give them a place to do that.”

The Youngs built their home in Shelbyville as a safe haven for their kids and their friends to have fun and learn about Jesus.

“We want to be the go-to spot for their friends, a safe space that their friends’ parents can send them to. We feel like they know we’ll take care of them and that they’ll be influenced properly,” Darin said. “When we built our house, one of our things was that we were going to use this as much as we can to bring glory to God. We want to use this space for that reason.”

The Youngs are excited to see more young faces getting involved at Shelby County Campus.

“I hope the campus brings more families that are connected to these kids in these groups,” Allison added. “I just feel like there are probably a lot of families attending in Shelby County, and we don’t even know it. I think when we all get into a smaller setting, I hope we can help people who are just attending to get plugged into their community.”

Allison grew up in Louisville, and though she said she doesn’t have a “dramatic testimony,” her youth group played a pivotal role in her walk with Christ.

“As a teenager, my core friend group was my youth group,” Allison said. “I spent a lot of time with them. I have very fond memories. I think that was instrumental in helping me to establish my own faith and for that to be such a high priority in my life. That’s what I want for my kids—that kind of experience—where their core group of friends are the ones who are going to encourage them in their faith and pray with them. And they do that.”

A friend from Allison’s youth group introduced her to Darin, and they got married in 2001.

Darin was raised in Lawrenceburg, Kentucky, and was often the only one in his youth group.

“My Sunday school in high school consisted of me, one other buddy and a teacher, so if anybody missed, we were one-on-one,” Darin said. “I can remember his name, Wallace Thompson, and just how devoted he was to be there with us even if it was just one-on-one.”

When Darin was 19, his dad died of colon cancer. While at Eastern Kentucky University, he “ran from God,” hit the party scene and was primarily “influenced by sports.”

After graduating and returning home, a young pastor who happened to play basketball, changed Darin’s life.

“One night, we were playing basketball and he sits down beside me. He says, ‘When are you going to cut this crap out and get your butt to church?’ Those were the first words ever out of his mouth to me. ‘OK, nice to meet you, too.’ He was preaching differently than anybody I ever heard speak,” Darin added.

Darin got back in church and began playing softball and basketball with Sports Reach, an organization that uses sports to share the Gospel on the streets and in prisons.

“God used a stupid game to change my life,” he said. “Once I started attending church again and playing softball with Sports Reach, it was a huge difference maker in my life. I’ve played hundreds of games in prisons all over the southeast … You see God using these games to make an influence.”